Why is Kerala famous for Ayurveda?

Kerala is known as the land of spices and also known as the hub for Ayurveda. Kerala is probably the only state in the country where Ayurveda is used as the mainstream medicine. Ayurveda is one of the oldest forms of the medical system and is also the most trusted way of treating people. Traditional practitioners still use this way of treatment on many patients and people still go for this treatment in Kerala. Here you can find many Ayurvedic medical schools, colleges and hospitals. Kerala has the largest number of Ayurveda colleges and practitioners in comparison to any other state or place in the world.

Kerala Ayurveda is known for its five prolonged treatments named Panchakarma. The treatment has medicated oil, milk, herbs and a special diet that are used to cure all types of ailments. A classic text on medicine, Ashtangahridaya, is the foundation on which the Ayurveda is based. The author Vagbhata is the disciple of a Buddhist physician and received little recognition in the rest of India. It is believed that few Brahman families were original Ayurvedic physicians and their descendants still carry on their prophecy of being an ashtavaidyan. Nowadays this holistic science is now practised all over the world.

Ayurveda is based on the principle of maintaining a relationship and balance between the body and mind and living close with mother nature. The southern part of India is very well known for the tourist destinations and traditional treatments where the region is completely covered with enormous plants and trees. The reason Kerala has become the best state for Ayurvedic treatment in Kerala is for Kalari (Kalaripayattu) a form of martial arts and it also has types of exercises and oil massages that can cure many diseases and is also the treatment for many of them. 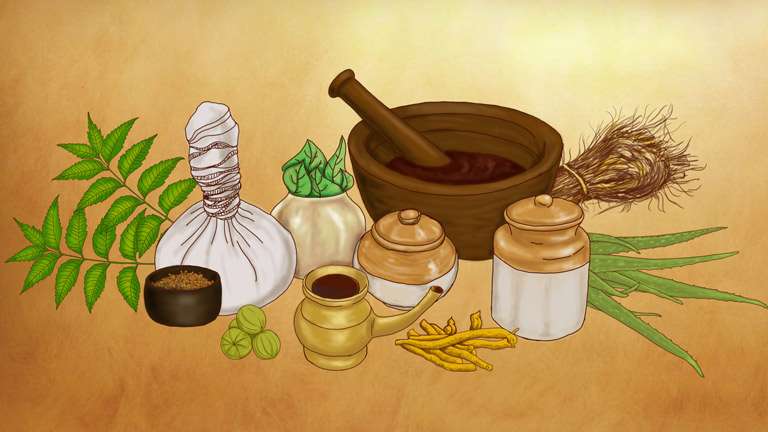 The Kalaripayattu is not only trained for battle but for also for many healing modalities known as Kalari chikitsa. Most Ayurvedic practitioners follow Kalari for the understanding of the human body and its functionalities. Kalari and Ayurvedic treatment are interrelated which balances the body and mind. South India is famous for its traditional culture and beautiful landscapes. According to Kerala Ayurveda and ayurvedic medicines are still adopted by many people.

Kerala also is remarked as a place for medical tourism by foreigners who are curious about the traditional treatments in the state. Kalaripayattu and Ayurveda are both rooted in the Vedas, Kalaripayattu from Yajurveda and Ayurveda in Atharvaveda. Some of the most popular treatments include Uzhichil, Pizhichil, Shirodhara, etc. Uzhichil Ayurvedic treatment is a traditional Indian massage technique developed by the Kalari martial artists of Kerala is thought to be thousand years old.

Pizhichil ayurvedic treatment is also an oil-based treatment where the person is given head and body massages. The oil which is used in this treatment can be varied ranging from sesame oil to ghee to other variants which are infused with many herbal oils. The type of Ayurvedic oil used on a person depends on his/her medical conditions and requirements. The vaidyas here are extremely talented in their most ancient treatise of Ayurveda which many scholars prefer innovation over the prior Samhitas of Charaka and Susruta, the originators of Ayurveda. The vast volume of Ayurveda colleges and the largest number of practitioners in comparison to any region of the world has led to a tradition of Ayurveda research in a scientific and ideal manner in Kerala.

Nature has blessed this state with benefits and is the best and foremost reason for the growth of Ayurveda in Kerala. The cool and calm climate with vast greenery helps in its fast development of it and also helps in growing the herbs and medicinal trees which are required during the treatment. The vaidyas here use the Kashaya chikitsa (treatment with concoction) using numerous Kashyams which are scientifically classified to be used in different health conditions. It is the practitioners of Ayurveda who focused on the antioxidant properties of Abayangam.

While there are many reasons for an Ayurvedic treatment here of them, the Ayurvedic practitioners are the master in this art and practice of various ayurvedic therapies and practices, Kerala is the home to many rarest and most exotic herbs and medicinal plants are endemic to the region and are used to make the most effective medicines and herbal formulations and finally Kerala not only provides ayurvedic treatments and therapies but to also many different Ayurvedic branches like Shalya Chikitsa (surgery), Kaya Chikitsa (Body Treatments), Baala Chikitsa (Paediatrics), Griha Chikitsa (psychiatry) and many more.

Apart from these, there are also treatments available for other treatments which are too complex or are incurable like spinal problems, diabetes, infertility, allergies and eczema and arthritis. They also have included modern equipment and techniques in it to more relevant to the changing times. The notable mentions are Enzyme therapy, bicarbonate therapy and Magnesium therapy through magnesium float chambers.

So, do give it a try to Ayurveda in one of the most beautiful places on earth and also enjoy the experience of it.

How can Ayurveda be effective on our health?

Ayurveda has been with us for a very long time and we also believe it from our heart. Ayurveda is known as the ancient Indian medic...

END_OF_DOCUMENT_TOKEN_TO_BE_REPLACED

Ayurveda: The history of the effective treatment

Ayurveda which is also known as Ayurvedic medicine is a traditional system of the Indian system. This system of medicine evolved in...

END_OF_DOCUMENT_TOKEN_TO_BE_REPLACED

There is no denying that your lifestyle and diet affect your skin. In today’s world, almost everyone is aware of this fact. That explai...